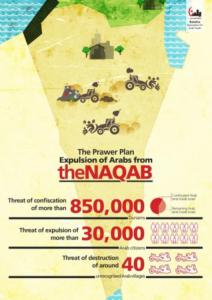 The ‘Prawer Plan’ is the innocuous sounding name for the biggest project of ethnic cleansing carried out by Israel since 1967 and so far, it is receiving scant attention by the international community or global mainstream media. The plan, detailed and condemned here by Adalah seeks to forcefully expel (i.e. ethnically cleanse) between 30,000-50,000 Bedouin Palestinian citizens of Israel from 850,000 dunums of their land in the Naqab desert, push them into an area that represents a mere 1% of the land to be confiscated. In the process, 40 ‘unrecognised villages’ will be demolished to fulfilling David Ben Gurion’s racist vision of Judaising the remainder of the Naqab. As Linah Alsaafin writing in the electronic intifada reminds us, much of the Naqab was ethnically cleansed in the initial Nakba of 1947-49. In 1948 (and 1967) however, War was both the pretext and smokescreen for such a large scale expulsion of Palestinians. The question and challenge to the international community (in the widest sense of the term) is this; without such pretexts and smokescreens, what will be your response to such a brazen display of ethnic cleansing, racism and apartheid? For those answering the Palestinian civil society call for Boycott, Divestment and Sanctions (BDS) the response should be two-fold: intensify our efforts to implement BDS and where possible, focus BDS campaigns against companies or institutions directly linked to this latest phase of the ongoing Nakba (HL) in the Naqab desert. The Stop the JNF campaign certainly provides this focus on the Naqab as the JNF/KKL will without doubt be directly linked to this land grab as they have with the entire Zionist project. Scottish Palestine Solidarity Campaign have also begun looking at the activities of one of Scotland’s biggest companies, The Wood Group with some interest and dismay.

An Aberdeen-based energy services giant, The Wood Group are currently building Israel’s biggest privately owned power station on what used to be the Palestinian town of Al Madjal (ethnically cleansed in 1948 and now called Askelon) just miles from the area designated for ethnic cleansing under the Prawer Plan. This $875 million project is due for completion sometime this year and is set to provide Israel with 8% of it’s electricity. Behind these figures lies a darker picture, one that won’t be presented to Wood Group shareholders. Just miles from this power plant is the besieged Gaza strip, plagued with chronic and often lethal power shortages due to Israel’s medieval blockade. Gazans will receive no benefits from this power station. Neither will the so-called ‘unrecognised villages’ earmarked for destruction under the Prawer Plan, as unrecognised villages, Israel refuses to connect them to the electricity grid. If Israel is allowed to succeed in this latest wave of ethnic cleansing and newly built Jewish-only communities replace the Palestinian Bedouin ones, we can probably assume they will be powered with electricity from the nearby Wood Group-built plant. If so, not only would this constitute a clear case of energy apartheid it would implicate one of Scotland’s most successful companies in what would be the biggest case of ethnic cleansing in the 21st century. The timing of the power plants completion and the implementation of the Prawer Plan may not be mere coincidence. Initial research has revealed that along with Keter Plastic (a BDS target with operations in illegal West Bank settlements) and the notorious Israeli water company Mekorot electricity from the plant will be sold to the Israeli Ministry of Defence. The Israeli Army has already been relocating it’s training bases to the South and at least some of the land to be seized in the Prawer Plan is earmarked for housing Israeli soldiers stationed at these bases. Even if no hard evidence can be found linking the Wood Group to the Prawer Plan can be found, contracts with the Israeli apartheid state alone, and the sheer proximity of the infrastructure they’re building to the Naqab present a clear case of guilt by assocciation.

On Monday 15th July Palestinians from across historical Palestine rose against the Prawer Plan. Demonstrations were held in the Naqab, Yaffa, Jerusalem, Haifa, Akka, Nazareth, Lod & Ramleh, Nablus, Hebron, Ramallah, Gaza City and many other places to coincide with a general strike by Palestinian citizens of Israel called the ‘Anger Strike’. Palestinian activist Abir Kopty articulates the national significance of resisting the Prawer Plan:

This is not just the struggle of Palestinians 48, its the struggle of all parts of the Palestinian people against the same power that keeps us divided, continues to colonize our land and transfer our people, whether in lands occupied in 1967 or in 1948.

At the time of writing, more protests are taking place across the whole of Palestine, despite many arrests and predictable Israeli violence and Palestinians have vowed that they will continue and continue to grow. Events on the ground can be followed through social media as Palestinian youth use the twitter hashtag #StopPrawerPlan to mobilise and report on the growing resistance.

The divisions amongst the Palestinian people are carefully nurtured and such manifestations of national unity across the whole of historic Palestine are seldom witnessed and as Ben White comments, resistance to the Prawer Plan is uniting Palestinians from all areas and factions. This makes them all the more inspiring and important and they demand cohesive and focused action from the international solidarity activists in response to this mass ethnic cleansing project. Be it Veolia, G4S, Sainsbury’s, The Wood Group or anyone else we must ensure that the BDS movement extracts a price for complicity with Israeli apartheid and ethnic cleansing and that no company, however large, is beyond the reach of BDS.

View all posts by smacleod →