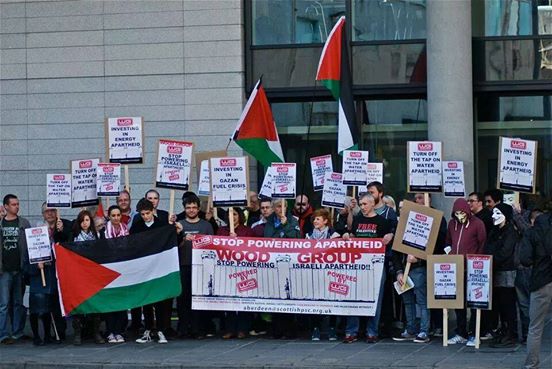 Following SPSC’s well-attended protest against Wood Group’s role in Israeli energy apartheid at their AGM last year, we note with interest that instead of the usual city centre venue, this year’s AGM is to be tucked away in the Altens Industrial Estate in the south of Aberdeen

Undoubtedly the organisers hope that this will lessen the chances of disruption by our protests. Wood Group’s notice of the AGM states that “Safety and Assurance is our top priority”. You can certainly be assured, Bob Keiller et al., that we will be there too.

On 21st April this year, Sir Ian Wood received a Beacon Award for Philanthropy for “transformational achievement” and bringing about “lasting social change”. The company he founded certainly helped to transform Gaza last summer, by aiding and abetting (including the direct sale of the electricity from the Wood Group plant to the Israeli Ministry of Defence) the killing of 2205 Palestinians, the destruction of 14 000 houses and causing an estimated £10.5 million worth of damage to educational establishments alone. That’s some social change.

The company which prides itself on its principles has completely failed to respond to our questions about the relationship between its power station in Israel and the fuelling of the machinery of terror, which flagrantly breaches international law again and again. We will continue to demand answers.

The AGM is on Wednesday 13th May at Trafalgar House, Hareness Road, Aberdeen AB12 3LE, starting at 10.30. We call on supporters of Palestinian human rights to join us there, assembling at 9.30. If you need transport from the city centre, please let us know. 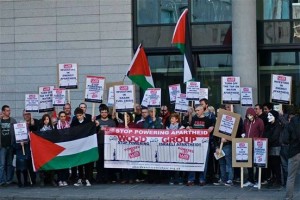